Take Action: Tell your Oregon legislators you support the Right to Rest Act, HB 2215.
April 5, 2017 - Oregon cities and counties are making it a crime for people to be homeless. Our new report, Decriminalizing Homelessness: Why Right to Rest Legislation is the High Road for Oregon, shows that basic acts of survival are being criminalized all across the state.
Our research found that Oreogn's most populous cities and counties have 224 laws that criminalize necessary life-sustaining activities like sitting, lying, resting, or eating in public. When someone has nowhere else to do these things, fines, fees, and a criminal record only further entrenches them in homelessness. Oregonians living on the street are forced make impossible choices to go about their daily lives.

Do I sleep in the park and violate the camping ban, or do I trespass onto private property? Where can I go to the bathroom? Where can I set my stuff down without attracting attention from police?

Homelessness and housing are a growing problem in Oregon. 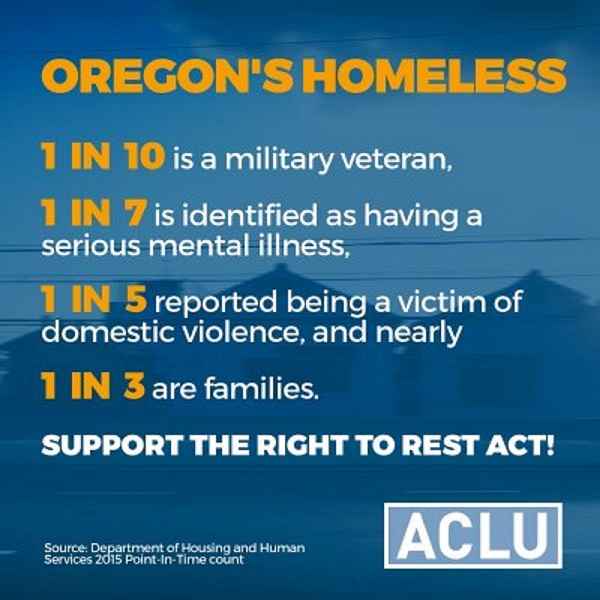 The region has seen the third highest increase in homelessness nationwide, according to the Department of Housing and Urban Development (HUD). In 2015, HUD counted 13,100 adults and children experiencing homelessness in Oregon. Of those Oregonians experiencing homelessness, HUD found one-in-ten was a military veteran, one-in-seven was identified as having a serious mental illness, one-in-five reported being a victim of domestic violence, and nearly one-in-three were families.
And the numbers are likely even larger than the HUD count reveals. For example, the Oregon Department of Education counted 21,340 K-12 students who experienced homelessness at some point in the 2015-16 academic year. The HUD count also does not capture people who are “couch surfing” or temporarily living with friends or relatives.
Criminalizing homelessness will not solve Oregon’s housing crisis.
Rather than focusing on solutions, cities and counties in Oregon have hundreds of ordinances on the books that make it crime or a violation for homeless people to go about their daily life. Local governments should focus on solving the root causes of homelessness and poverty, instead of directing all their resources towards criminalizing homeless people.
Our report suggests humane solutions, including the Right to Rest Act - HB 2215, currently before the Oregon legislature. The Right to Rest Act will protect people who are homeless from laws that prevent rest and other life-sustaining activities. But time is running out for Oregon legislators to take action.
Download Decriminalizing Homelessness: Why Right to Rest Legislation is the High Road for Oregon
Executive Summary
Full Report
Related Issues

Get ready for local elections on May 17